Yes. The reason for the trip.

I’m really not sure what it is, but there is something about him/the show. Maybe it’s because he’s so very much like Gibbs in real life and I love how strong of a character it is (and that he has flaws – he’s no hero). Maybe I love the show so much because it reminds me of my Grandpa. I don’t know. But I get serious happy feelings when I can look over and see Mark Harmon ten feet over drinking a beer – and it’s no big deal.

It’s funny, before each weekend the past three years, I’ve thought to myself, “great, I’ll go once get the pic/autograph/t-shirt and that’ll be it. A great experience and… time to move on.” But that’s not the case. Someone from the OKCIC mentioned ‘next year’ and I was practically mapping out a potential route in my mind.

Since the event on Friday was cancelled because of… oh… what was it? Oh, a tornado (!!!), the dinner event was postponed to Saturday. Saturday was originally supposed to be the baseball game, but the dugouts were flooded with 10 inches of water and so it was cancelled. Harmon and his buddies (retired sports guys, Frank Marshall – my second favorite person) still showed up to sign autographs. We had to wait in line for awhile as this was a free event, but it was in the shade and they had free lunch if people were interested (hotdog, chips and a soda). I felt bad that I didn’t have (well, want) anything signed by the other guys as I made my way down the line.

Rick Sutcliffe was sitting next to Frank Marshall and asked to see the photo I had to be signed. It was this one, from last year:

He thought it was hilarious and nudged Frank to look. Last year, his eyes lit up at the sight of flat!Gibbs and he had a good time joking around. Was pretty much the same expression when he saw the photo and then took a few moments to decide what to write (rather than just sign his name). He then passed it to Harmon, who also got a laugh out of it. It was pretty chill though, friendly conversation. Not that 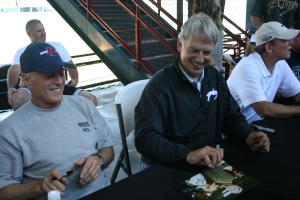 we’re actual bff’s like I love to announce, but there is certainly a familiarity. And it’s nice that he actually take the time to look up, make eye contact and talk rather than just let people shuffle down the line awkwardly.

From there we walked back to the hotel (about a mile) surveying some of the damage. Not a lot in Bricktown – a few toppled trees, broken street lamp, but nothing major. I showered, did my hair and then it was about time to head back out to Shawnee for a redo of the event. It was fun, but more subdued. I’m not sure that everyone found out that it was rescheduled, or maybe some of the locals had bigger things to deal with. The waitress we befriended at Flint Bar was there with her mom and sister – two of their cars were caught up in flood water and the sister’s apartment (downtown OKC) had some damage. They had been up until 3am, but nothing was going to keep them away from the event. Super sweet people. I got my second photo signed (on that Darby – plays Shannon Gibbs) had mailed me. He said she was super sweet (which I’d have to agree) and after some quick chit-chat, we moved on.

Some cool auction items this year – the main one that I’d pretty much do most anything for, was a set tour of NCIS for four people. It went for $7500. My friends and I were quickly trying to figure out if we could split that cost, but… I wish. Maybe I should get a third job and set money aside JUST for that. My luck, they won’t auction a set visit next year.

Spoke briefly with Frank Marshall again and then pretty much just hung out with my friends. It was a bit PTSD’ish being back again the same night and every time we’d step outside for some fresh air, we’d glance up at the sky and then check our radar 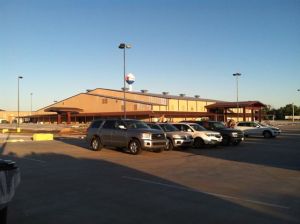 apps on our phones. Still can’t believe what all happened there. This is the building across from the bowling alley. The bathroom shelters were inside.

In the end, it turned out to be a really, really nice event. And while I will always be terrified of returning to OKC, I can’t wait to go back.

P.S. CAIT IS A FUCKING PRO PHOTOGRAPHER – EXCEPT WHEN SHE TAKES MOSTLY BLURRY PHOTOS.

One thought on “Mark Harmon.”