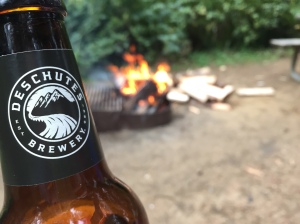 Oh, and the smell of campfire.

While it’s been a long time since we’ve camped, instead moving to the dog friendly Best Western at Agate Beach.  That said, it doesn’t mean we’ve given up on the campground 100%.

We had a combination of credits and gift cards for 3 free nights, so we headed down

Thursday afternoon to stay through mid-day Sunday. Because the hotel is dog friendly, the Boo got to come along and be a ‘beach dog’ – she was thrilled. We played in the tide pool, chased the waves (well, she did), searched for shells and played with seaweed (and then passed out later on).

Friday we spent most the day in Downtown Newport. We ate at Mo’s, wandered the shops and watched the Sea Lions fight for space on their designated dock.

Saturday had a slow start, but we spent the afternoon on the beach and then headed to our camping site for a fire. We roasted hotdogs for dinner and made s’mores for dessert. The campground was full, and we felt slightly guilty about holding a campsite from someone who would’ve spent the night, but for $28 bucks, it was worth the campfire and cheap (but delicious) dinner.

In all, it was a great, albeit short weekend away.

I love this hotel. We’ve stayed here numerous times over the years and for the most part, it’s fantastic.

The beach: You walk out the back door, and down a little hill and you are on the beach. If you’re lucky enough to have a beach view, there is nothing in your way.

The rooms: Clean, but dated. For the price, I’d expect it to be a little more updated. On one hand, maybe because we’ve always stayed in a dog-friendly room (certain ones are designated for the pooches), perhaps they just aren’t updated..? Spruce it up, and this would be a top place on the coast to stay.

Restaurant: Decent for breakfast. The Banana fosters french toast was a little soggy and overly sweet when it arrived. Then I realized they made it with banana bread. Stick to regular french toast for this dish, Best Western. You’d win an award.

The cost: CHECK YOUR CREDIT CARD ACTIVITY AFTERWARD. Ok, so they made things right immediately when I called, but I was frustrated to see that they double charged me for the pet fee ($40, instead of $20 per stay) despite the fact that they shouldn’t have charged it at all – we paid it in cash when checking out. 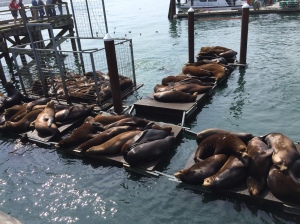 Had a (mostly) fantastic long weekend down in the Bay area and along the Oregon coast. A little rocky to start – some asshole in front of us lost some of their camping supplies and we hit their frying pan. Luckily it was only a tiny scratch and we laughed about it the rest of the way down.  The drive down was long, hot and oh-so-boring. We hit temps as high as 110, added nearly an hour in construction detours and with nothing but dry, brown grass, it’s not exactly my favorite drive.

We arrived just past dinner time on Friday, checked in and headed to my favorite ‘Crawdaddies’ for dinner. It’s a hot, garlic, shrimpy mess – but well worth it. Saturday we were up and headed into San Francisco. We explored the wharf, found the house/park they used for Full House (yep), Lombard Street and then popped over the Golden Gate Bridge.

The reason for the trip was the Sounders vs. San Jose Saturday evening. Jason wanted to go to see the new Levi’s Stadium and I, of course, to see my team. Clearly he got the better half of the deal. We weren’t awful (and much better than the game against LA) but it was still uninspired and we just couldn’t connect. We ended up going to see Guardians of the Galaxy afterward to ease the pain. Great movie!

The drive up along the coast was much better than the drive down. It was cooler (fucking cold, according to Jason). But it was sad in some ways,

many of the small towns along the way in very sad shape. Eureka, once busy with lumber mills and fisherman, has taken an obvious nose dive. The town is run down, homeless (most looked like they were on some sort of drug) were roaming the streets and the conversation we were privy to in the pub was… sad. Gold Beach was similar, though the people were friendly. The bartender invited himself up for a cup of noodles or bagel dog – when I said I didn’t have either of those (or know what a bagel dog was), he invited himself up for a popsicle. Um, okay. But it was funny – everyone knew every one and at the grocery store, the lady in front of us mentioned something about her brother going away. Jason asked where (thinking he was joining the army or something big like that) and the lady at check-out looked up and was like who the fuck are you? Clearly we were outsiders and they all know each others business. Turns out the chick’s brother was only headed down to LA (must be for school).

The best part of the drive back might have been the Trees of Mystery. What a great (little) hike and then the gondola ride further up into the forest. It was cloudy so we couldn’t see far, but it was still fantastic. No bigfoot sightings, but plenty of Elk, deer, a lizard and other little creatures (and road kill) along the way. My favorite tree was this one – a single tree with 12 smaller trees growing off of it. Amazing! Others grew in absurd angles, in tight clusters and/or with massive girth.

It, of course, wasn’t a trip to Cali without a stop at In & Out.

The last stop was my forever favorite, Newport, Oregon. We met my parents at the KOA where they spent two nights with the dog. Once they were packed up we headed in to Newport for lunch at my most favorite Mo’s (on the water, not the one across the street). Shrimp salad in an avocado, chowder and garlic cheese bread. I don’t think, in 15 years, I’ve ever had anything else. In fact, I don’t remember ever ordering anything else. Jason headed out right after lunch with a long drive back to the Tri-Cities, but we hung a bit longer and walked through a few shops.

Overall, the trip was fun. I just wish we could’ve come home with three points (or even one), but we can’t win them all.