I’ve been neglecting my blog! Oops!

Some adventures take us out into the city and some require that we just get our shoes on – maybe a jacket. The excitement of garbage day starts on our way to the bus stop. The line up of garbage, recycle and yard waste cans along the street excites him long before we hear the first truck rumble past.

Returning from the bus stop, Evan will shut and ‘lock’ the screen door, but leaves the main door open. We remove 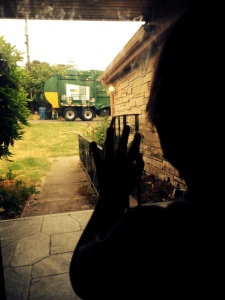 our shoes, but a day like today, we left our sweatshirts on (it wasn’t too cold, but a bit of a breeze from the front door). Evan was in the middle ofsnack when the first truck rumbled to a stop out front. He’s off the chair in a flash and face pressed to the screen door as he announces their arrival over and over. We get six viewings as they go down the street and come back up the other side awhile later. Once the first goes by, that’s the end of any game we might be playing.

Occasionally he’ll bring a toy over to the front door to play, otherwise he’ll park himself to wait. Since today’s weather wasn’t too bad, once I convinced him to finish snack, we listened for the next truck and then went to the top of the driveway to wait. Usually he wants to talk about the bugs and the grass and my car and the car across the street and and and… but with the garbage truck on its way, he narrated its every move (and it’s a long street with several stops).

Back inside, to get him away from the door, I searched some garbage truck videos – magic school bus, reading rainbow (hello kickstarter) and he soaked up every word. While his words are becoming more and more clear, he still has so much to say that’s hard to understand. And I hate the standard “uh huh… yeah… cool” because anyone can see that you’re just giving a basic answer (hell, I still do this to my mom) so I don’t want him to think I’m not listening, but he had lots to say about the garbage truck videos and I caught maybe a third. Mayyyybe.

Looking for some new places to explore next week – always open to suggestions, and it doesn’t have to be kid-specific. Evan has had a blast at places like the market and it’s a great way to learn colors and names of food!