Today was long and exhausting, but overall a pretty decent day. We hit the road at 7:30 with plans to hit the Wyoming Dinosaur Museum as well as the Hot Springs County Museum (both in Thermopolis, WY) before hauling ass to Pueblo, Colorado. ‘Thermop’ (as it was posted on several signs) is 85 miles from where we spent the night in Cody, Wy. Both places were cool. The Dinosaur fossils were awesome and the Hot Springs museum was like a giant antique shop where you couldn’t buy anything. Thermopolis is a pretty tiny town – in fact, the hot springs museum gives directions by saying that it’s one block north of the stoplight in town. The people were friendly (and commented on my sparkly shoes). I asked for some directions to the post office (and forgot to go – ugh) and it’s so cute the way they use the stoplight for pretty much any/all direction.

From there we hightailed it to Douglas, Wy for lunch at the Village Inn (same place as last year). As we sat listening to the people around us, we realized it was the same senior group sitting behind us. They go EVERY Wednesday for free pie day. And we saw the lady that works at the Chamber of Commerce (where the giant Jackalope is). After lunch we headed over for a peek around all the Jackalope stuff and then headed toward Pueblo. We stopped briefly for gas at one point and then after suffering through Denver’s traffic, we pulled into the Garden of the Gods as the sun was starting to set. So beautiful. 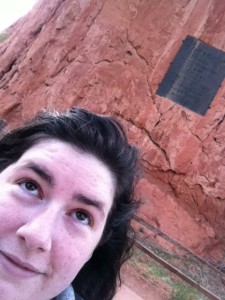 It was dark by the time we rolled into the parking lot in Pueblo and we’re both ready to pass out. We hit a lot of piss/pouring rain, so I certainly feel it more in my shoulders compared to the two days before. We also hit some construction areas where we crawled along at 20mph through the mud (i literally had mud caked to my car at one point).

Sorry these are so brief, but… can’t even keep my eyes open.

Gas mileage wise, my car has been a bloody rockstar. Like, for reals. I’ve been getting between 31-33mpg (granted I’m pretty religious about cruise control, so that helps).