The past few days have been crazy (but mostly in a crazy good way) with little drama and zero tires flying toward my precious car. 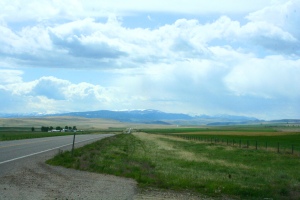 We weren’t horribly delayed – the damage to my car is only cosmetic so that can be dealt with when I get home. So Tuesday we hit Yellowstone a little later than we had originally wanted, but we made good time. Lots of Elk and lots of Bison but no bears. I was a little sad.

Old Faithful was a bit of a… well… letdown, but part of that was because the one super obnoxious person behind us that kept say “well, this is going to be the one time it’s not faithful” because we had to wait a little longer. Poor Cait was ready to put her fist in his face.

The gift shops were pretty awesome, not gonna lie, and we probably spent more time/money than necessary. We spent Tuesday night in Cody, Wyoming. We were a little slow in getting going, and after enjoying a decent (free) hotel breakfast we headed on our merry way to Burlington, Colorado for the night. We made a fun stop in Douglas, WY which is big on Jackalopes (my collection is growing), and had some fun there.

Thursday we were up and on the road, making one last longer haul. We got going at a decent time and didn’t make any stops worth noting until Lindsborg, Kansas which is a little ‘Swedish’ town. Honestly, it’s roughly one bad tornado away from not existing, but they had some cute Scandinavian things.

We rolled up to the hotel in OKC, found Bree and high-tailed it to Brix for the Southwest Chicken Wrap and a couple of margaritas. Then we wandered back to the hotel bar and I totes drank a whole pitcher of the worst Sangria (read, not even real sangria) ever. But I paid for it. It was basically white wine, orange liquor and a couple of lemon slices. We chatted with some OKC Thunder (read: Seattle Sonics) fans – the game was right across the street, and then Cait and I saw Mark Harmon come back from a night out with some of his buddies. Clearly I wasn’t the only drunk one. Too far away to talk to him and I wasn’t about to run down the sidewalk to chat him up.

Today is the bowling event, so we’re just chilling before we put our pretty faces on. He was at breakfast this morning and walked by with a friendly nod. Can’t wait for a little chit-chat, photo, autograph… whatever session. 😉