After what seemed like a whirlwind of adventure to get to New Orleans it was time to head north. Nashville is about 530 miles north and a little east of New Orleans, which translates to about 8 hours. I wanted an early start to the day as I had plans to stop in Birmingham, AL to stop at the Civil Rights Institute which was open from 1-5pm. By the time I was on the road (after a detour to drive through the Garden District, and to swing by Starbucks) it was close to 9am. 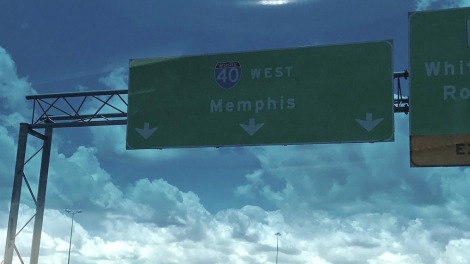 I got to within 23 miles of the Institute when I hit some stormy weather. No tornado warnings, just a total downpour. I ended up exiting the freeway to wait it out in a CVS parking lot because I couldn’t see and the amount of water on the roadway was incredible. Very thankful for those new tires because I was certain I was going to skid off the road at one point. I didn’t arrive at the Institute until nearly 3pm, but it was absolutely worth finding my way downtown for. Because it’s free on Sundays the place was packed and we had to go inside in groups so that they could space everyone a little bit. Also because the A/C was having a hard time keeping up with all the people in there and it was a little too hot in some areas. It was very disappointing in a way. To see how far we HAVEN’T come in the past 60 or so years is, well, sad. AMERICA, PULL YOUR SHIT TOGETHER.

I wanted to grab a late lunch in Birmingham, but my radar showed a massive front headed toward Nashville (3hrs north) that had already caused problems in Memphis and had flood watches popping up all over central Tennessee.

I skipped lunch and headed North, watching as the storm clouds rolled in… and then nothing. I had about ten minutes of a sprinkle of rain and that was it. Nothing every materialized and I watched the dark clouds just roll on by. Damnit. My dinner (some diner near my hotel) was mediocre in comparison to the few places I had sought out in Birmingham. Oh well, I was able to get a pretty long, decent nights sleep.

The following morning I started off with a visit to the Belle Meade Plantation. What caught my attention about this place is it’s influence on the American Thoroughbred. I had *THE* best guide who led the tour of the house (no pics allowed inside, boo). He wove together the family history of FIVE generations who all seemed to be named the same, state history of Tennessee, slavery and the civil war as well as all this equestrian history. And it all comes down to this one horse I’d never heard of: Bonnie Scotland. I don’t remember the exact number, but something like 120 of the 143 Kentucky Derby winners can be traced back to this horse. Man O’War, War Admiral, Seattle Slew, California Chrome, Secretariat, etc.

So I spent a little longer touring the house, the carriage barns, the stable, etc, because it 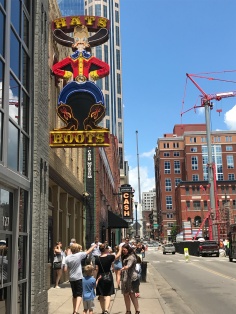 was 11am before I even hit the gift shop (and I’m not leaving without touring the gift shop). From there I headed to Downtown Nashville and circled FOREVER before spending a small fortune on parking. My plan was to tour the Ryman auditorium and then hit the Johnny Cash museum. Unfortunately, the Ryman was packed, so I just hit the Johnny Cash museum before my three hour drive West to Memphis.

Aside from the ridiculous amount of road work, it was a pretty easy drive. I detoured

slightly to drive through Loretta Lynn’s Ranch which is everything and nothing. When you first turn in there is an office for the campground/RV park, signs to a pool and arcade. You then drive past concert grounds, a motorcross… place (who knew she was into that?) before arriving at a gift shop and museum and place for horse rides, plus what looks like a private residence. In any case, the museum was closed (A/C broke). I let my GPS guide me back toward the highway and it took me on a long, narrow gravel road in the middle of nowhere for miles. At one point I almost turned around, but when I zoomed out on the GPS I saw it did know what it was doing.

And now, I’m in Memphis.

Because I’ve just got one day here, I stuck to Beale St., the Peabody ducks and a few of my favorite places to eat. But I feel like the next time I’m here, it’s time to discover a new part of town. I was a little let down by the hotel this year (the room is fine, the bed comfy) but the staff has been cold and unwelcoming which is a complete turn around from the last several times I’ve stayed here. For the past several years this has been hands down, one of my most favorite places to visit. And this time, just a standard hotel within walking distance of one of my fav. places to booze it up.

Speaking of, one of my absolute favorite places in Memphis is the Kooky Canuck. A

Canadian restaurant. But the drinks here are amazing. As are their fried green tomatoes and fried pickles – both of which are pretty much life. Don’t let anyone tell you otherwise. Thick cut, juicy with just enough breading to keep things interesting, but not get gross.

Tomorrow I head further west to Oklahoma City. It’s about 7 hours (direct on I-40). It’ll be interesting to approach from the other direction, but I doubt I’ll need my GPS. I have a full day scheduled for the following day visiting my favorite shops, driving through a specific neighborhood in Moore that I’ve toured every year since the tornado. It’s been interesting to see how everything just slowly comes back together. And of course a martini at my favorite bar, Flint.