Had a lovely afternoon at the Woodland Park Zoo with a fantastic fandom friend today. Cacky, thanks for visiting!

I have such conflicted feelings on zoos, but of all the zoos that I’ve been to, I feel like we’re pretty lucky with the WPZ. The exhibits are much larger than most other zoos I’ve visited, and they do a fantastic job of enrichment. That said, certain animals like the Orangutans, Elephants and Gorillas always look so sad.

WPZ lost one of it’s elephants yesterday.  At 45, Watoto should have had another 20 years left. While the WPZ is leaps and bounds above other zoos, I think they need to re-evaluate their elephant enclosure and send our two remaining elephants (Chai and Bamboo) to a sanctuary. I don’t think there is enough land for them to expand where they are at. 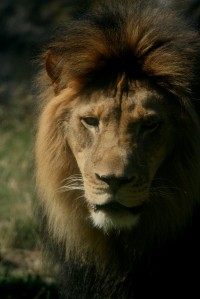 Such smart animals deserve more. I think we are past the point where people need to be face-to-face with an elephant to feel the urge to save them.

The Orangutans are the other ones that need something more. I only ever see them sitting around with their burlap blankets over their heads. One was sitting at the glass just staring ahead as everyone crowded close.

We were treated to an up close view of the male lion today. He strolled around, scratching, sniffing and watching zoo visitors through the glass. The size of his paws are absolutely massive and his thick mane gorgeous. I didn’t see Adia and her cubs were sent elsewhere earlier in the year, but I don’t think I’ve ever seen the male lion up close before. What a beautiful creature.

We also saw the hippo swim around (briefly). I think it’s the one animal at the zoo that I’ve never seen move until today. In fact, they could’ve been fake hippos for the past however many years, and I wouldn’t have known.

That’d be a good zoo scam. 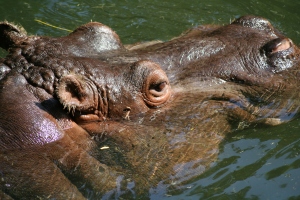 One of my all time favorite spots at WPZ is the willawong station where you can feed parakeets, cockatiels and various other brightly colored birds. I had a delightful little cockatiel sit on my finger while he nibbled on some millet. He then fluffed up a bit and just sat on my finger.

All in all, a fantastic afternoon at the zoo!